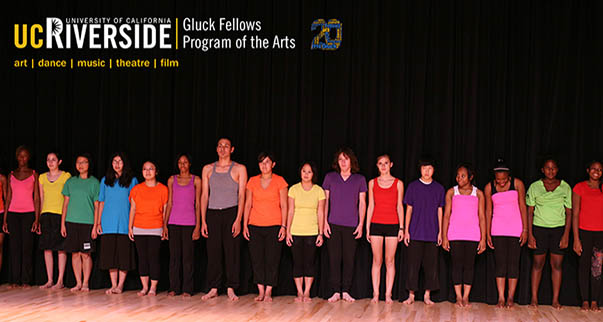 
Please reserve a seat for a Conversation with Susan Rose. Free Admission. Seating is limited.

Join the Gluck Fellows Program of the Arts at UCR to celebrate 20 years of arts outreach in the Inland Empire! On Thursday April 6, from 6-9pm, the Gluck Program will take over the Culver Center at UCR ARTSblock with a free, all-ages event featuring live music and dance performances, art-making, film screening, and roving street theatre performances. Come decorate a swag bag and fill it with your own art projects while you see and hear live music and dance from UCR’s talented graduate and undergraduate performing artist Fellows! Free, all ages, 6-9pm April Arts Walk

Spotlight on Hope Film Camp Red Carpet Screening
During the first hour of the Gluck 20th Anniversary Gala, join a celebratory screening of Spotlight on Hope Film Camp short films. Guests will be treated to a screening of select films from the 2016-2017 Spotlight on Hope Film Camp Sessions, followed by a Q&A with the Campers about their work. Spotlight on Hope Film Camp is supported in part by the Gluck Fellows Program of the Arts at UCR. Free Admission. Seating is limited.
A Conversation with Dance Professor Emerita Susan Rose
Susan Rose served as a professor of dance at UCR for 23 years, 11 of those years were spent as the director of the Gluck Fellows Program of the Arts. At 7:30, the Gluck Fellows Program will premier a short film about a slice of Susan Rose's work, Light Contradictions, and she will join in conversation with the audience about her life and work.
This evening Gala will serve to celebrate all of the people who, for two decades, have worked to put talented UCR Graduate Students and the community members together for art and culture educational experiences that have enriched the community and inspired the next generation to approach the world creatively together.

Support has been provided by UCR College of Humanities, Arts and Social Sciences (CHASS) and the City of Riverside.