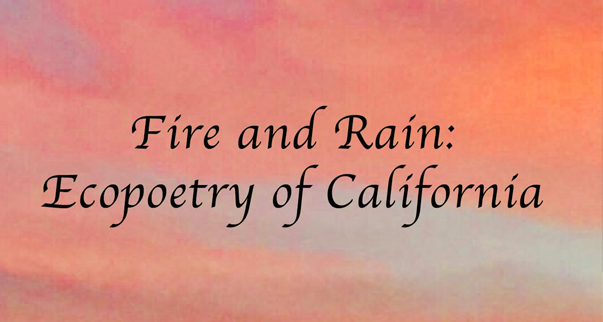 Conversations at the Culver - Fire and Rain: Ecopoetry of California

Of Fire and Rain, Pattiann Rogers calls it “not only a beautiful and thorough anthology but an homage to California, its varieties of landscapes, and the amazing poetry it has evoked.”

Malcolm Margolin of Heyday reminds us "[t]he battles environmentalists fight on land, in the legislatures, or in the courts are won or lost first in the human imagination, and the range, depth, and vitality of this selection of poems will take the imagination by storm.”

"I went back to soulful, pristine, early James Taylor to make sure I was feeling the wet, cleansing urgency of Lucille Lang Day and Ruth Nolan's burning anthology. Anthology, ecology, mythology, and all the ‘ologies’ boil down to four-letter words—sacred kissing cousins—love and life”, says Al Young, former California Poet Laureate.

From the introduction, Dana Gioia, California’s current Poet Laureate, notes "Day and Nolan have done a considerable service to select and gather these poems. Their ample anthology provides a generous record of California poets’ love and concern for their common world. What more important theme can we in this golden land share?”

John Brantingham is Sequoia and Kings Canyon National Park’s first poet laureate. His work has been featured in hundreds of magazines and The Best Small Fictions 2016. He has ten books of poetry and fiction including The L.A. Fiction Anthology (Red Hen Press) and A Sublime and Tragic Dance (Cholla Needles Press). He teaches at Mt. San Antonio College.

Thea Gavin is a native of Orange, CA, where she never gets tired of shoelessly exploring--and writing about--her local native plant communities. In 2011 she spent three life-changing weeks as National Park Service Artist-in-Residence at Grand Canyon's North Rim, where she now returns as often as possible, including each June to lead a creative writing workshop for the Grand Canyon Association Field Institute. After retiring in 2017 from twenty years of teaching writing at Concordia University Irvine, Thea has been enjoying more opportunities to wander, write, and inspire others to "think outside the shoe" via her poems, essays, and presentations. theagavin.com; @theagavin; instagram.com/theagavin/

liz gonzález is the author of the poetry collection Beneath Bone (Manifest Press 2000). Her awards include an Arts Council for Long Beach Professional Artist Fellowship, an Elizabeth George Foundation Artistic Grant, and residencies at the Kimmel Harding Nelson Center for the Arts, Lucas Artists Residency Program, and Hedgebrook. Find her at Lizgonzalez.com

Ruth Nolan is professor of English and creative writing at College of the Desert in Palm Springs, CA and is a scholar, author and lecturer focusing primarily on topics of California Desert environment, culture and literature. A former wildland firefighter for the US Forest Service and BLM California Desert District. She is the author Ruby Mountain (Finishing Line Press); editor of No Place for a Puritan: The Literature of California’s Deserts (Heyday Books); and co-editor of Fire and Rain: Ecopoetry of California (Scarlet Tanager.) She is the winner of the 2018 Los Angeles Poetry Society Award and the recipient of a 2018 Love of Learning Award from the Phi Kappa Phi Honor Society for her forthcoming book Fire on the Mojave: Stories from the Deserts and Mountains of Inland Southern California, for which she also won a 2017 California Writers Residency Award.

Chad Sweeney is the author of six books of poetry, including Little Million Doors (Nightboat Books, 2019) and Parable of Hide and Seek (Alice James Books, 2010). His poems have been included in Best American Poetry, The Pushcart Prize Anthology and Verse Daily. He is an associate professor of creative writing at California State University San Bernardino and editor of Ghost Town Lit Mag.

Jennifer K. Sweeney is the author of three books of poetry, Little Spells, How to Live on Bread and Music, winner of the 2009 James Laughlin Award, the Perugia Press Prize, and nominated for The Poet’s Prize, and also Salt Memory. The winner of a Pushcart Prize, her poems have been translated into Turkish and published widely in literary journals including Academy of American Poets and American Poetry Review. She lives with her family in Redlands, where she teaches poetry privately and at the University of Redlands.

Reading will be followed by light refreshments and book sales and signing. The Barbara and Art Culver Center of the Arts is located at 3834 Main Street in downtown Riverside. This event is free and open to the public.