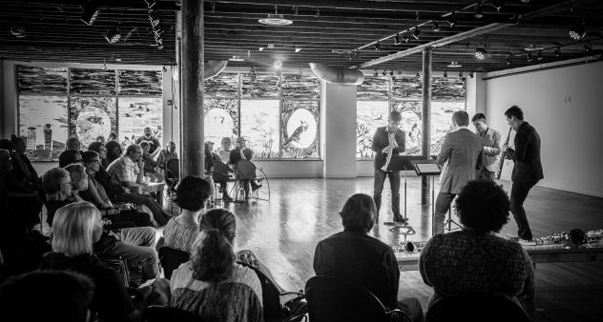 ~Nois is a Chicago-based saxophone quartet that defies categorization by working between the boundary of contemporary classical music and experimental improvisation. Founded in 2016 by graduate students at Northwestern University, ~Nois (pronounced “noise”) has quickly emerged as one of the premier young ensembles dedicated to innovative and engaging performances. Known for their “masterclass-level demonstrations of precise articulations and glowing legatos” (I Care if You Listen), “truly innovative musicianship,” and “raw creativity” (Cacophony Magazine), ~Nois has been awarded prizes at prestigious chamber music competitions including the Second Prize in the Open Division of the 2018 M- Prize International Chamber Arts Competition, the Silver Medal at the 2017 Fischoff National Chamber Music Competition, Second Prize at the 2018 North American Saxophone Alliance Quartet Competition, and First Prize at the 2016 Chicago Woodwind Ensemble Competition. ~Nois was invited to be an Ensemble Fellow to the 2018 Blackbird Creative Lab, where they worked closely with fellow Chicago- based ensemble, Eighth Blackbird.

~Nois’ third season features many exciting projects including a residency at the University of Chicago’s Chicago Center for Contemporary Composition. Throughout the academic year, the quartet will collaborate with the composition department’s graduate students and Postdoctoral Researcher Tonia Ko to create an immersive experience connecting music and performance to the design and architecture traditions of Chicago. ~Nois will perform Pulitzer Prize winner William Bolcom’s Concerto Grosso with conductor Dr. Mallory Thompson and the Northshore Concert Band to open the ensemble’s 63rd season. The 2018-2019 season will also see ~Nois twice return to the Frequency Series at Constellation. The first performance in September 2018 will be a collaborative concert with F-PLUS, while the second in June 2019 will feature world premieres of works composed by members of the Chicago Composers’ Consortium. ~Nois will perform with My Brightest Diamond when the band performs at Chicago’s renowned Metro. ~Nois will also join forces with the Zafa Collective to present a collaborative concert at the Fulton Street Collective in February of 2019. Outside of Chicago, ~Nois will travel to Princeton University in November 2018 to perform Gemma Peacocke’s Dwalm at the Princeton Sound Kitchen. ~Nois will also collaborate with three New York City based composers — Nathan Hudson, Howie Kenty, and Ed Rosenberg — to present concerts throughout the city including a performance at Brooklyn’s Areté.

Highlights of previous seasons include performances at the 2018 Omaha Under the Radar Festival, the 2018 Continuum Music Festival in Memphis, the Frequency Series at Constellation in Chicago, New Music Chicago’s Impromptu Fest, and the Irving Park Fine Arts Series. In March of 2018, ~Nois embarked on a five-week-long tour throughout the eastern United States with performances and master classes at Baldwin Wallace University, East Tennessee State University, James Madison University, Lee University, Manhattan School of Music, Tennessee Technological University, and the Universities of Akron, Georgia, Maryland, South Carolina, and Tennessee. During the tour, the quartet performed with the Bang On A Can All- Stars for the U.S. premiere of Michael Gordon’s Big Space at the Big Ears Festival, a multi-genre music festival in Knoxville, TN. ~Nois has also performed with members of Eighth Blackbird, flutist Claire Chase, and singer-songwriter Shara Nova of My Brightest Diamond.