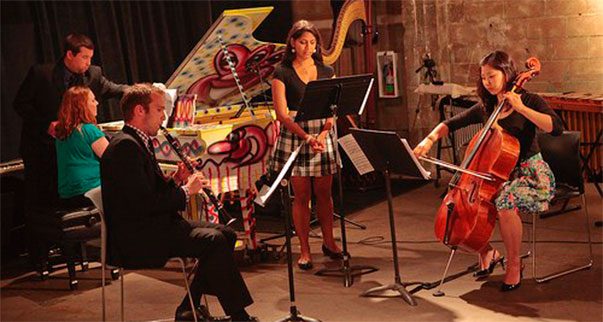 "Ready for any mainstage keen enough to know what's what" (LA Times), What's Next is a post-classical music collective devoted to performing cutting-edge music from Southern California and beyond. Since forming in 2008, the group has consistently lead the vanguard of grassroots new music in the region, presenting vibrant concerts of both world-renowned living composers and budding local talent in alternative venues throughout LA.

Uniquely devoted to local composers, What's Next has performed the work of over 50 Southern California composers on their Los Angeles Composers Project, an annual concert series that they produce, now in its sixth year.

Recent highlights include a critically acclaimed summer micro-series at underground LA venues Monk Space and Mimoda, a guest appearance at the Carlsbad Music Festival, as well as performances of operas by Michael Gordon and Stuart Copeland with Long Beach Opera."

A collaboration between ARTSblock and the UC RIVERSIDE Department of Music