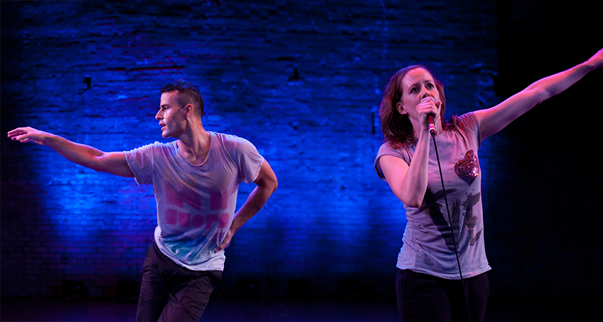 
Speaking directly to the audience while dancing and sometimes singing, casebolt and smith tear apart their process of making dances, offering honest insights into their limitations as a duet company and their fear of becoming unoriginal. O(h) evolves from demonstrations of what they can, can't and won't do into intricate movement phrases layered with pop culture references. They sing show tunes, rewrite iconic rock songs, borrow from famous choreographers, deploy brash humor and lightning-quick banter and toss in a dash of breakin'. The result is a fast-paced, complex and hilarious glimpse into the minds and pants of casebolt and smith. Running time 59 minutes

About casebolt and smith:

Relying on their friendship and shared sense of humor, Liz Casebolt and Joel Smith craft dances that reveal their choreographic methods and collaborative rapport to analyze gender and sexuality politics as well as the overly serious traditions of modern dance.

Founded in 2006, casebolt and smith is based in Los Angeles and tours nationally and internationally and is a member of Pentacle (DanceWorks Inc), a non-profit service organization for the performing arts, Mara Greenberg and Ivan Sygoda, Directors. They have presented work at the Cathedral Quarter Arts Festival in Belfast, Vancouver International Dance Festival in Canada, Joyce SoHo in New York, Contemporary Art Forum in Santa Barbara and Museum of Contemporary Art in San Diego, as well as at CounterPulse in San Francisco, Actors Company Theatre and Diavolo Dance Space in Los Angeles and at the Herberger Theater in Phoenix. They have been commissioned to set choreography on students, as well as teach master classes, at various Southern California colleges.

casebolt and smith is on a mission to share their work with broad and diverse audiences through performance, teaching residencies and commissions.

"Liz Casebolt and Joel Smith, who initiated their collaboration in 2006 to explore and implode conventional ideas about gender, relationships and dance making, create perhaps the most entertaining, engaging and explicative dance theater on the planet. With disarming ingenuity and whip-smart intelligence, they gently serve up - via song, dance and by simply talking to us - our most cherished and problematic ideas about contemporary performance, male-female relationships and creative collaboration, then graciously and hilariously debunk them."
- Camille LeFevre
Minn Post