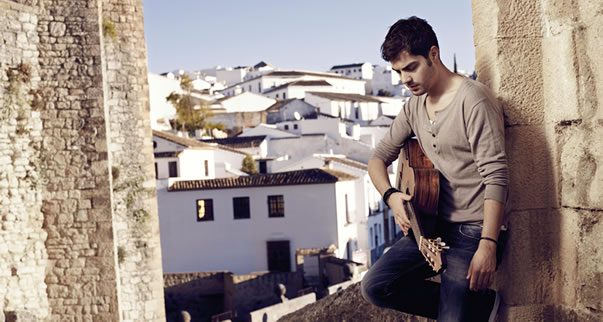 
Introducing Miloš Karadaglić the young Montenegrin and multiple prize winner, who has established himself as one of today's most gifted guitar virtuosos. Growing up during the Balkan civil war, Karadaglić started playing the guitar at age 8 and very quickly won national recognition for his performances. At age 16, he was awarded a full scholarship to study at London's Royal Academy of Music. After graduating with First Class Honors, he went on to complete a Master's degree in Performance and was subsequently made a Meaker Junior Fellow - the first guitarist to be given this accolade. Karadaglić also received the Julian Bream Prize in 2005, adding it to a growing collection of thirteen accolades that include the first guitarist to ever win the Prince's Prize, a music prize of HRH Prince Charles. Now an exclusive Deutsche Grammophon recording artist, Karadaglić's debut album Mediterraneo, topped the UK's charts at #1 and celebrates the classical guitar's Mediterranean heritage with works by Granados, Albéniz, Trrega, and Theodorakis.

Concert highlights from his first European tour include his concerto debut with the English Chamber Orchestra, recitals at the Cheltenham and Spitalfields Music Festivals, Norfolk and Norwich Music Festival, Menuhin Festival in Gstaad-Switzerland, various other solo and chamber music concerts and recording collaborations in the UK, Holland, Switzerland and Italy. Now touring the US, Miloš's only southern California engagement is right here at the Culver Center where you'll witness firsthand the extraordinary skill, innate poise, and sublime musicianship of classical guitar's newest hero.

Seating: There are no assigned seats and no tickets will be issued. Admittance for this concert will be on a first come, first served basis. We recommend all attendees arrive early for performances they wish to attend.