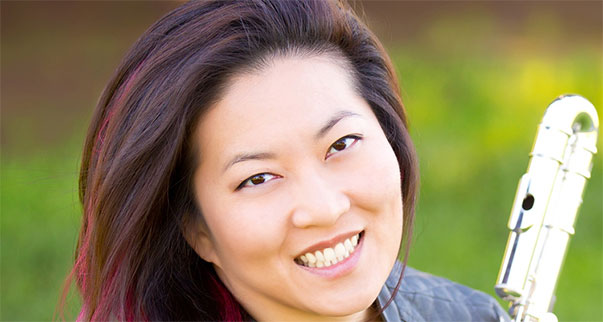 Milky Way or Galaxy are translations of the traditional Korean word that is also the first name of flutist Meerenai Shim. Pronounced "me-ren-ay," the unusual name befits this unique performer and teacher.

Straddling the classical, pop, and experimental worlds, Meerenai has made a niche for herself as a unique music curator and performer. She has premiered and commissioned numerous works on her own and as part of the A/B Duo. She has released two compact discs on her own label in 2013 (The Art of Noise) and 2011 (Sometimes the City is Silent) which include works by Daniel Felsenfeld, Janice Misurell-Mitchell and Ian Clarke. I CARE IF YOU LISTEN calls The Art of Noise "an enjoyable and charming exploration of a range of styles and instrumentations. Meerenai Shimss engaging playing highlights the common thread running through these pieces - sophisticated, yet accessible."

Meerenai founded the flute and percussion group, A/B Duo, with percussionist Chris Jones in 2012. She has performed all over the United States as a soloist and chamber musician, including a residency at MASS MoCA as a Fellow at the Bang on a Can Summer Festival. In addition to regular broadcast of her recordings on classical radio stations, Meerenai's recordings and performances have been featured on Music from Other Minds, Live from WFMT, and New Music Box.

Since 2005, Meerenai has been studying the Alexander Technique, Feldenkrais Method and Body Mapping. As a Licensed Andover Educator® she teaches the course What Every Musician Needs to Know About the Body® in private lessons as well as in masterclasses and workshops. Her experience with observing and studying movement helps her students play well and avoid injury. Meerenai's book, Scale Studies for Beginner and Intermediate Flutists, has been praised by flute pedagogues worldwide.