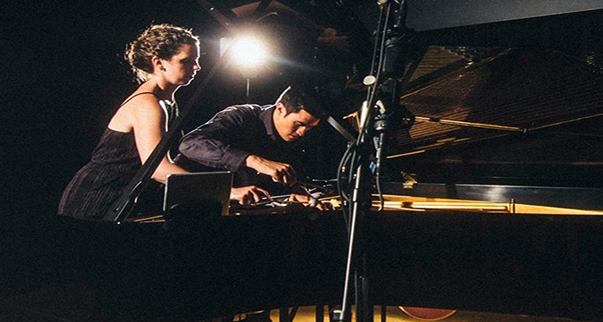 HOCKET is a cutting edge piano duo based in Los Angeles. Lauded as "brilliant" by Mark Swed in the Los Angeles Times, members Sarah Gibson and Thomas Kotcheff are both pianist-composers dedicated to commissioning and performing contemporary music. They have performed in some of the most exciting festivals and venues across the country including The Bang on Can Summer Music Festival at MASS MoCA, The Center for New Music in San Francisco, and the Carlsbad Music Festival. Together, they have premiered dozens of chamber and solo piano works and have collaborated with the premier, new music ensembles eighth blackbird and The Bang on a Can All-Stars. HOCKET is a recipient of a Presser Foundation Award to fund two upcoming commercial recordings and has been a selected artist in Firebird Ensemble's Outstanding Young Artists Initiative. HOCKET is a performing artist on the Schoenhut Piano Company Artist Roster.

HOCKET started the current 2015/2016 season as fellows a The Bang on a Can Summer Music Festival at MASS MoCA followed immediately by a residency at the Avaloch Farm Music Institute where they collaborated with Kettle Corn New Music composers Alex Weiser, Emily Cooley, and Ryan Harper on three new commissions.