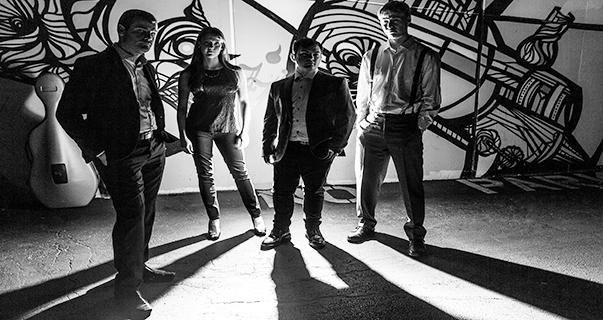 Hailed by the Boston Globe as "elegant and exacting," Hub New Music is a mixed quartet specializing in music of the 21st century. With a unique instrumentation of two winds and two strings, Hub explores a richly diverse palate of contemporary repertoire. Often employing a roster of local guest artists, the ensemble celebrates a musical era fueled by the spirit of collaboration and desire to shatter artistic limitations. The quartet's name is inspired by its hometown of Boston and the notion that a Hub is a center of creativity and innovation.

Founded while studying at New England Conservatory, Hub has had the privilege of working with the nation's most innovative musical minds including Kati Agocs, Daniel Wohl, Missy Mazzoli, Robert Holstein, and Spencer Topel. Seeking to expand the audience reach for contemporary art music, Hub fosters several interdisciplinary collaborations and community building educational programs. Recent interdisciplinary collaborations include an exploration of composer Andrew Norman's ties to the world of architecture at the Museum of Fine Arts, Boston. On the educational front Hub launched Composium in 2014/2015, a performance project that showcased the life cycle of a new piece through conversation between composer, performer, and listener.

Hub New Music owes thanks to its supporters including the New England Conservatory Office of Entrepreneurial Musicianship through which the ensemble was founded. Hub New Music is a fiscally sponsored project of Fractured Atlas.