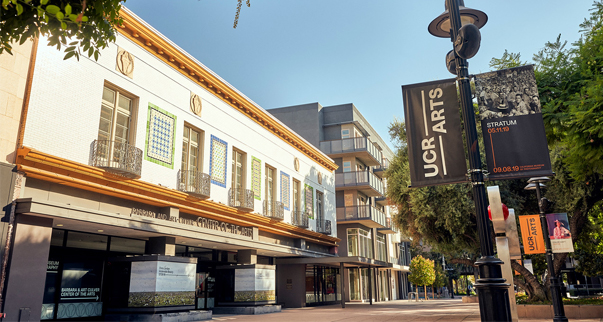 UCR ARTS opened to the public in 2010, bringing together the California Museum of Photography (founded in 1973), the Jack and Marilyn Sweeney Art Gallery (1963), and the Barbara and Art Culver Center of the Arts (2010). Located three miles from UCR’s main campus, UCR ARTS is located on a single block in adjacent historical buildings along the pedestrian mall in downtown Riverside. Housed in two renovated department stores from the late 19th and early 20th centuries, UCR ARTS' adaptive reuse enlivens the city’s downtown core.

By merging the already established photographic museum and university art gallery with the new, multi-disciplinary Culver Center, UCR ARTS serves as a cultural anchor for both the University and the broader Inland Empire communities. UCR ARTS organizes provocative and timely art exhibitions, performances, screenings, and other programs with the aim of invigorating the cultural life of artists and residents of Southern California, nurturing creative and critical thinking on campus and in the community, and promoting the importance of the arts for a healthy society. UCR ARTS offers innovative programs that engage diverse audiences, nourish the imagination, and challenge assumptions.

The extensive art, photography, and research collections of the CMP and Sweeney Art Gallery make UCR ARTS an important destination for audiences as well as researchers working in a wide range of fields.

UCR ARTS is committed to offering students opportunities for professional museum work. Students from UCR and elsewhere are involved under the aegis of independent course status, internships, work-study, and as volunteers.


UCR ARTS is generously supported by UCR College of Humanities, Arts, and Social Sciences, and the City of Riverside.