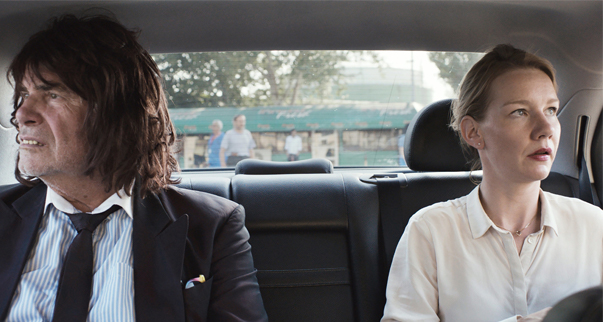 
Winfried doesn't see much of his working daughter Ines. The suddenly student-less music teacher decides to surprise her with a visit after the death of his old dog. It's an awkward move because serious career woman Ines is working on an important project as a corporate strategist in Bucharest. The geographical change doesn't help the two to see more eye to eye. Practical joker Winfried loves to annoy his daughter with corny pranks. What's worse are his little jabs at her routine lifestyle of long meetings, hotel bars and performance reports. Father and daughter reach an impasse, and Winfried agrees to return home to Germany. Enter flashy "Toni Erdmann" - Winfried's smooth-talking alter ego. Disguised in a tacky suit, weird wig and even weirder fake teeth, Toni barges into Ines' professional life, claiming to be her CEO's life coach. As Toni, Winfried is bolder and doesn't hold back, but Ines meets the challenge. The harder they push, the closer they become. In all the madness, Ines begins to understand that her eccentric father might deserve some place in her life after all.

"Comedies are supposed to be short, but this German farce... succeeds by virtue of its endlessness-like its hero, an aging piano teacher and irrepressible joker, the movie keeps bugging you and bugging you until you can't help but laugh." - J. R. Jones, Chicago Reader

"If you're looking for the best and most beguiling foreign-language film of the year, you'll find it in Maren Ade's German father-daughter story that will leave you laughing and choking back tears, often simultaneously." - Peter Travers, Rolling Stone