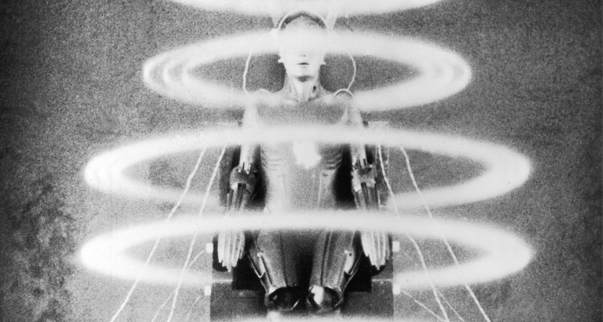 
The Metropolis Multi-Media Event is a joint collaboration by UCR’s Departments of Comparative Literature/German Program, Music, History of Art and ARTSblock. The event brings together faculty and students from CHASS and the downtown community of Riverside. It does so by utilizing the varied resources and competences of the institutions involved, and thus seeks to strengthen both interdepartmental and communal corporation. Subject of the event is Fritz Lang’s 1927 silent movie masterpiece “Metropolis” whose 90th anniversary it commemorates.

Although a silent film by the standards of its time, “Metropolis” is one of the most remarkable modern attempts to recreate the age-old idea of a total artwork that can combine all existing media into one. Incorporating visual means of film, dramatic art and stagecraft, as well as a strong literary element, present in the intertitles/title cards spread across the film, “Metropolis” was, and is, not least a musical enterprise. Not only is Lang’s film arranged in structural units borrowed from music (prelude, intermezzo, furioso) – music, and sound in general, are also among its preeminent topics: from musical and dance interludes to the frenetic soundscapes of the modern city. And music used to be played along with the first screenings of the film, a practice revived today in audio-visual recordings of “Metropolis”, which restore the original music of the film.

The Metropolis Multi-Media Event follows the inspiration of Lang’s large-sized ‘marriage of the arts’ while rediscovering the historical roots from which it arose – the interplay of filmic art and live performance. Hence, it will result in a two-day presentation of Lang’s film combined with student and guest artist performances dedicated to the film. These audiovisual performances will be short, standalone performances that respond to and vary themes of “Metropolis” – the movie and its eponymous subject – implementing electronic music and piano performed live.

Pieces performed at the concert will include:

Prelude of The Instant World

The event will further be accompanied by a display of books and other materials from UCR’s famous Eaton Collection, available for viewing on the two days of the event, illuminating the legacy of “Metropolis” in 20th century science fiction culture.

A symposium at the second day serves as a stage for short presentations from the organizers of the event and from UCR students who are going to explore vital aspects of Lang’s masterpiece from a variety of perspectives, illuminating, among other things, its cinematographic, choreographic, iconographic and literary facets.

Symposium presentations will include: