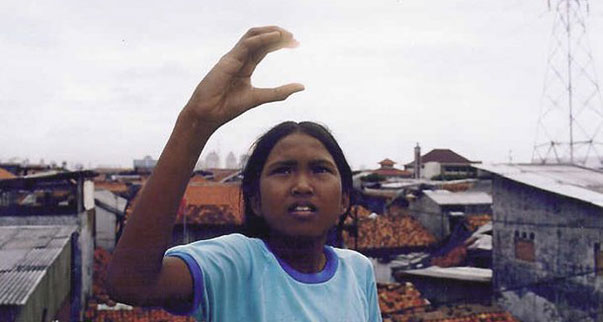 Shape of the Moon


Leonard Retel Heimrich's documentary focuses on a Christian family living in the outskirts of Jakarta, Indonesia, the largest Muslim country in the world.

"Leonard Retel Helmrich painstakingly presents Indonesia with such detail and understated emotion it radiates fervent beauty. In the largest Muslim country in the world, Helmrich is able to find quiet moments with three generations of a Christian family amidst the bustle and texture on the outskirts of Jakarta. The widow Rumidja is a Christian who prays regularly with her granddaughter, Tari, but practices some Muslim traditions. Rumidja's son Bakti refuses to participate in Muslim traditions until he decides to marry a Muslim woman. The vérité style creates an experiential rhythm as the camera silently weaves in and out of tunnels and water wells, and lingers delicately as characters sleep, eat, and live." - Bird Runningwater.
Sundance Film Festival Winner, Grand Jury Prize, Sundance Film Festival, 2005
*Subtitled