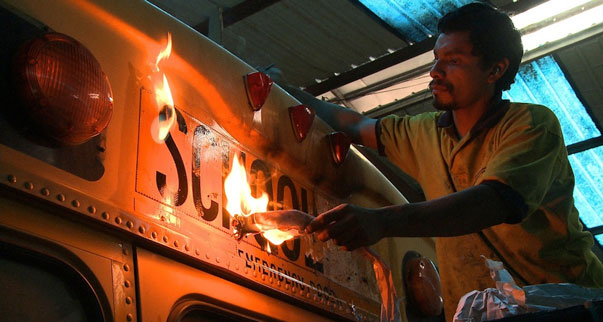 
Every day dozens of decommissioned school buses leave the United States on a southward migration that carries them to Guatemala, where they are repaired, repainted, and resurrected as the brightly-colored camionetas that bring the vast majority of Guatemalans to work each day. Since 2006, nearly 1,000 camioneta drivers and fare-collectors have been murdered for either refusing or being unable to pay the extortion money demanded by local Guatemalan gangs. LA CAMIONETA follows one such bus on its transformative journey: a journey between North and South, between life and death, and through an unfolding collection of moments, people, and places that serve to quietly remind us of the interconnected worlds in which we live.

“Mark Kendall’s quietly moving documentary, La Camioneta is modest and farsighted as the Guatemalans who resurrect school buses. The movie begins in rural Pennsylvania followed by a hazardous trip to Guatemala via Mexico. The bus lands in Quetzal City, the site of an epidemic of violence in which gangs extort payment from drivers and killed nearly 1,000 drivers and fare collectors in 2006. But La Camioneta is not a graphic exposé. It is an upbeat story of resilience, regeneration and artistic imagination. A philosophical voice- over by a passenger, lends the film a  ‘When you die, your body dies, but your being doesn’t die. It’s the same for a bus. Life is a journey. Everything carries you along.’” - Stephen Holden, The New York Times.