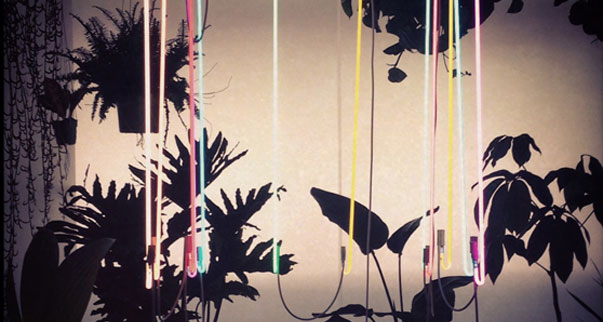 
ULTRAVIOLET: Light Installation by Hiromi Takizawa is a site-specific installation that observes the role of light in architectural and environmental spaces. Prominently placed at the front of UCR Culver Center of the Arts, facing the downtown pedestrian mall, it is presented in conjunction with the annual Festival of Lights in the city of Riverside.

Through continuous exploration of her Japanese heritage and her encounters of the nuances and oddities living in the West, artist Hiromi Takizawa intermingles these dualities into a dialog using light as the impetus of her work. For her presentation at UCR Culver Center of the Arts, Takizawa continues her fascination with temporal duality by connecting neon as material and subject into two separate environments controlled in one space where the viewer is invited to experience the work inside and outside of the building. As a result, ULTRAVIOLET operates as part sculpture and part installation instilling the aesthetic of the 1960s mininalist light and space movement.

Hiromi Takizawa received an M.F.A. in Craft and Materials Studies from Virginia Commonwealth University in Richmond, VA and an M.A. in Glass at California State University at Fullerton. She has served as a faculty member specializing in Glass at Saddleback College in south Orange County, CA, California State University at San Bernardino, and Pilchuck Glass School in Stanwood, WA. She has exhibited her work at Heller Gallery in New York, NY, RAID Projects in Los Angeles, CA, 12 Galleri og Verksted in Norway and Ohio State University in Columbus, OH. She was recently named as the youngest artist of the top fifty artists included in Urban Art Glass Quarterly’s 50 at 50. She was born and raised in Nagano, Japan. She currently works and lives in Santa Ana, CA.


ULTRAVIOLET: Light Installation by Hiromi Takizawa was organized by UCR ARTSblock and curated by Jennifer Frias, Associate Curator, Sweeney Art Gallery, University of California, Riverside. Support was provided by UCR's College of Humanities, Arts, and Social Sciences (CHASS) and the City of Riverside.