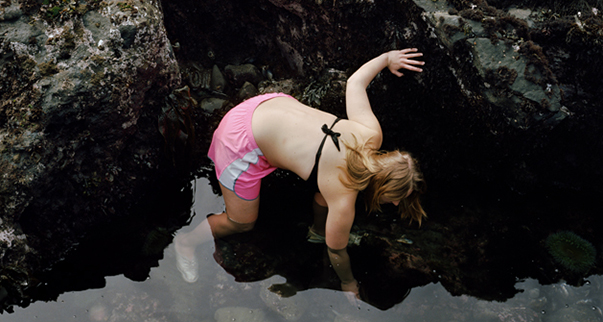 
Flash! contemporary art series presents Untitled (2014), a photograph inspired by Sharon Lockhart’s acclaimed film Double Tide (2009). In this work, the viewer encounters an isolated subject framed in Lockhart’s signature directorial style. A girl bends, supporting herself against a rock, to inspect a specimen of abalone submerged under the shallow waters of a beachside tide pool. Always interested in areas of overlap and difference between the mediums of film and photography, Lockhart here enacts many similarities shared with Double Tide: the posture of singular labor, here reframed as one of play; the specific and important connection between a coastal town and the sea, one of the most elemental forces of nature; and the particular reliance that the microcosmic location and subject hold on the sea (tide pools only exist by virtue of the varying ebbs and flows of the ocean).

Flash! features single works made within the last year. The exhibitions are presented on the third floor of the CMP. Sharon Lockhart: Untitled is the eighth exhibition in the series. 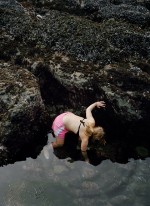