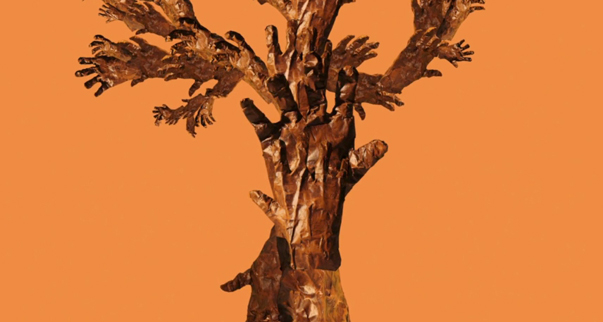 
Admission to the opening reception is free to the public.

Artist Melanie Nakaue fuses her sculptural work with stop motion animation in Regenerate (2013). The video features a life-sized human hand composed of painting tape, wire and acrylic, moving contorting and transitioning into a larger composition of an abstracted tree.

Melanie Nakaue is a Los Angeles based artist and designer working within the mediums of experimental animation, sculpture and installation. She received her MFA from the California Institute of the Arts. Selected screenings and exhibitions of her work include: Nichols Gallery at Pitzer College, the Luckman Gallery at California State University, Los Angeles, LAND, AM NUNDEN DA (London), 533 (Los Angeles, CA), Portland Documentary and eXperimental Film Festival (Portland, OR), and Monte Vista Projects (Los Angeles, CA).

The Culver Center Digital Mural Project 2015-2016 series is curated by Jennifer Frias, Associate Curator, Sweeney Art Gallery at UCR ARTSblock. The Culver Center Digital Mural Project at UCR ARTSblock's Culver Center of the Arts presents a series of changing projects on the two screens inside the façade's glass kiosks that face the pedestrian mall. These projects are an opportunity to extend ARTSblock programming into the public space. UCR's College of Humanities, Arts and Social Sciences (CHASS) and the City of Riverside have provided support.