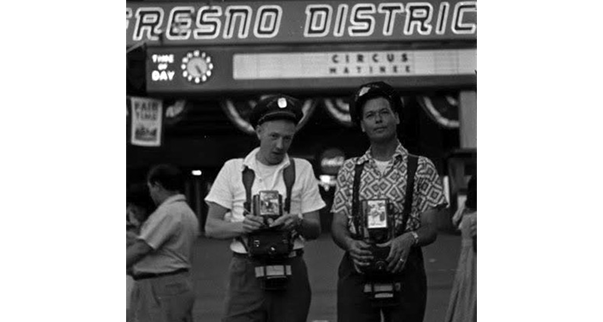 
This is the first exhibition ever devoted to Street Vendor Portraits, a form of photography practiced worldwide from the 1930s through the 1970s, long before we carried digital cameras.  Street vendor photographers snapped first, then surprised customers with the offer of a portrait as soon as the film got developed and printed. Many said yes! Today these full-length pictures of ordinary people—photographed on the street just like movie stars caught by paparazzi—survive in flea markets and family albums.  In San Francisco, Joe Selle called his business “Fox Movie Flash” and his vendors worked Union Square, Market Street, Cliff House and the Sacramento State Fair.  Selle developed all the film, but only printed pictures that sold.

In the early 2000s, Andrew Eskind used then-new technology to look at 100,000 Fox Movie Flash negatives for the first time since they were made.  Along with striking images, the digitized strips of film revealed what Fox Movie Flash photographers found on the San Francisco streets: an unpredictable parade of diverse people going about their lives.  Photographers approached each subject with energy and humor; performance was part of the pitch. Through their eyes, we see a world where everyone has value. Today, cameras are everywhere, from our phones to the ATM, and ordinary people are photographed with or without consent.  But when Fox Movie Flash and street vendor photographers worked the crowds, cameras were a relative luxury, and surveillance was not a part of everyday life.  We see these images as a composite portrait of the public sphere in the years after World War II, a time and place we rarely see in photographs.