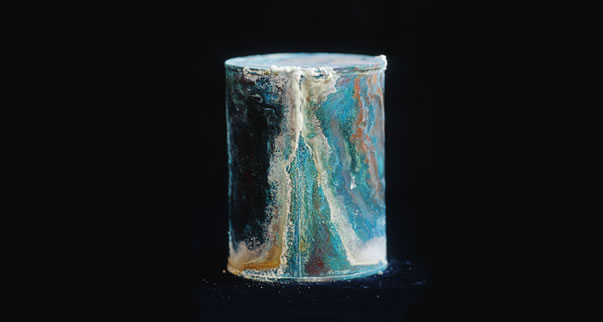 
Library of Dust is a project that David Maisel completed in 2008 with the publication of the photographs as a book. The series had begun three years earlier on the grounds of the Oregon State Hospital where he had learned there was a storeroom lined with shelves that held thousands of copper canisters. These contained, he knew, the unclaimed ashes of people who had died at this 'insane asylum', as it had once been called. Corroded along the lead side seam by chemical interaction between the metal and the ashes, many of the cans had a livid fur of blue-green on their exterior. Placing these on a black felt background and photographing them at close range, Maisel created a kind of civilian counterpart to the Tomb of the Unknown Soldier - each canister a mini-Monument to the Abandoned and the Forgotten.

Working in window light, Maisel had to make exposures in slow time befitting these memorial objects that the hospital had accumulated between 1883 and the 1970s. The first day, as he was making his photographs, a work detail of prisoners arrived from a penitentiary to clean up the building. Sneaking a peek into the room, one prisoner whistled as he said to no one in particular 'the library of dust'.