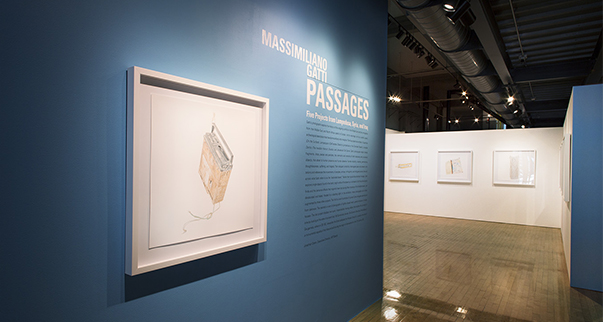 California Museum of Photography is pleased to host Massimiliano Gatti’s first American exhibition. Gatti’s photographs explore the history of the ongoing conflicts in the Middle East and the immigration from North Africa coasts to Europe, not by reportage, but by a careful, poetic, archeological description that transforms artifacts into metaphor. Gatti’s photographs depict shards, fragments, chips, pieces and particles, the remnants and remains of both necessary and unwanted objects, that attest to human presence and human absence: human industry, creativity, persistence, thoughtlessness, suffering, and tragedy. Their eloquent simplicity interrogates past and present civilizations and references the movements of peoples, armies, immigrants, and refugees across time and across what Gatti refers to as the “extended desert.” Rather than typical documentary footage, Gatti explores single objects found in the harsh, bright white of the desert sun: all objects, both the archeological finds and the personal effects that migrants have lost during their crossing of the Mediterranean, are desaturated and faded, flooded by a dazzling light. In the exhibition, these photographs are further augmented by a set of portraits of current Syrian refugees peering out from darkness; a set of photographs of tightly closed metal, grated windows of Syrian houses; and quiet, imperceptibly moving videos that explore the concept of time by looking at the sites of ancient Iraqi Tell Gomel and Jerwan, the first the site of the Battle of Gaugamela, where in 331 BC Alexander the Great defeated the Persian Darius III, the second the site of a monumental aqueduct which Assyria built during the reign of Sennacherib in the 7th century BC.

The five projects are entitled: In superficie (On the Surface), Lampedusa o dell’esteso deserto (Lampedusa or the Extended Desert), L’invisibile dentro (The Invisible Interior), Exodus, and Jewan and Tell Gomel.

Massimiliano Gatti, Italian photographer and archeological activist, worked with the archaeological mission of the University of Udine in Qatna, Syria from 2008-2011. From 2012 to 2015 he served as a photographer with PARTeN an interdisciplinary research unit conducting archaeological activities in the Kurdistan region’s Land of Nineveh in Iraq, the home to some of the most important archaeological sites in the world. Gatti’s interest in the exploration of ancient ruins and past traces has led him to work as well with photographic projects in Scotland. Gatti has exhibited extensively in many group and solo exhibitions in Italy and in such European cities as Edinburg and Paris. His exhibition at CMP is his first American show. Gatti lives and works between Italy and the Middle East.

The Opening Reception for Massimiliano Gatti will take place at 6 pm on Saturday May 30. As part of the Reception, in conjunction with Passages: Five Projects from Lampedusa, Syria, and Iraq by Massimiliano Gatti, the Culver Film Series will screen Saving Mes Aynak at 7:30. This film follows Afghan archaeologist Qadir Temori as he races against time to save a 5,000-year-old archaeological site from demolition. A Chinese mining company is closing in on the site, eager to harvest billions of dollars worth of copper buried directly beneath the archaeological ruins. After the screening at 8:30 there will be a discussion with Massimiliano Gatti, Professor Fariba Zarinebaf, Chair of the Middle East and Islamic Studies Program at UCR, and ARTSblock Executive Director, Jonathan Green, focusing on Gatti's work in relationship to politics and photography and the ongoing destruction and erasure of cultural heritage artifacts in the Middle East.

Following ARTSblock’s presentation, the exhibition will travel to the Italian Cultural Institute in Los Angeles, where it will be on view September 16-October 15, 2015. Visit http://www.iiclosangeles.esteri.it for more information.