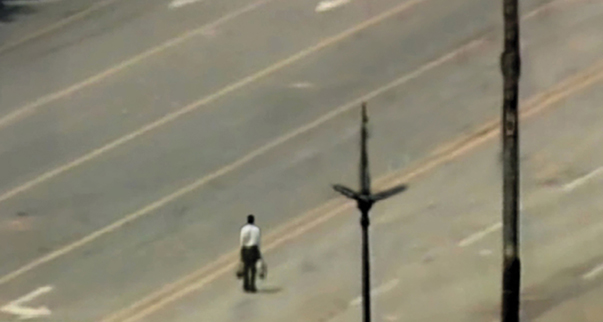 
For The Record… presents a series of single-channel video works, each addressing recent social, political, or economical conflicts through an artistic lens. HONG-AN TRUONG merges visual appropriation with found footage of Viet Nam during the French colonialism in 1954. The collaborative team, JEFF&GORDON explore the housing crisis in 2011 during the Occupy Wall Street national movement through an analogy to the racket sport of squash. Using computer applications and programs, JOSH AZZARELLA radically reconstructs  iconic footage from the Tiananmen Square Protest in 1989.

For The Record… exemplifies the breadth of UCR Sweeney Art Gallery’s holdings that range from drawings, installations paintings, photography, sculpture, and video by emerging and mid-career artists in contemporary art.

For The Record…Contemporary Videos from the Permanent Collection of UCR Sweeney Art Gallery is curated by Jennifer Frias, Associate Curator, Sweeney Art Gallery at UCR ARTSblock. UCR's College of Humanities, Arts and Social Sciences (CHASS) and the City of Riverside have provided support. Gift represented in the exhibition include those from the artists, along with collectors Mark and Hilarie Moore.