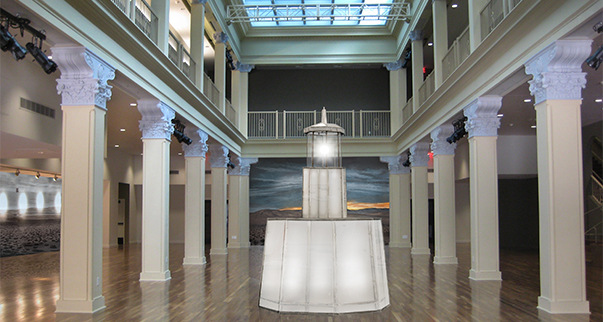 Scheduled to coincide with City of Riverside’s 22nd Annual Festival of Lights, Desert Lighthouse Ultimatum presents a project status report from multi-media artist Daniel Hawkins, documenting his struggles to erect a full-size, functioning lighthouse in the Mojave Desert near Hinkley, California – an edifice he completed once but which was immediately dismantled by scavengers. Following hot on the heels of his Desert Lighthouse Protocols, which was his MFA thesis exhibition at UC Irvine in 2014, Ultimatum expands and focuses his vision with an array of artifacts and documents, centering on the fully functioning top 1/5 of the rebuilt lighthouse. The Culver exhibition also includes materials as diverse as the artist’s beautifully painted panoramic backdrops of the actual building site, a pair of oversized bulletin board compositions presenting an intricate non-linear pictorial/informational representation of the Desert Lighthouse saga, video animations simulating the lighthouse’s eventual decay, and a limited edition Prospectus for potential investors in this exciting Land Art investment opportunity.

Los Angeles-based artist Daniel Hawkins’ work often consists of the deliberate undertaking of improbably ambitious interactions with the landscape – as in his ongoing actual-size recreation of the Hoover Dam in piecemeal fragments. Cycles of grandiosity, failure, and rationalization are explored and articulated through a battery of sculptural, architectural, land art, and performative strategies, while incorporating diverse media from printmaking, drawing, and painting, to video, sound art, and digital imaging.

As critic Doug Harvey observes in his essay for the Prospectus, “Drawing equally from the legacies of land artists like Robert Smithson and storytellers such as filmmaker Werner Herzog, Hawkins’ Desert Lighthouse project illuminates a constantly shifting landscape of post-modern narratives, hearkening back to the Neolithic monument builders at the dawn of human history while looking forward to the internet’s transformative impact on the nature of human consciousness and reality.”

Desert Lighthouse Ultimatum is organized by UCR ARTSblock’s Culver Center of the Arts, and curated by Tyler Stallings, Artistic Director of the Culver Center of the Arts & Director of the Sweeney Art Gallery. Support is provided by the University of California Riverside’s College of Humanities, Arts, and Social Sciences (CHASS) and the City of Riverside. In addition, support for the Desert Lighthouse has been generously provided by the Center for Cultural Innovation and The Center for Land Use Interpretation.