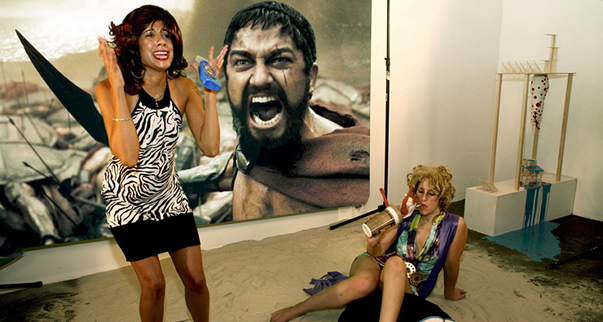 
The Culver Center of the Arts is pleased to present selected film/video works of Asher Hartman, best known for his work in the intersection of performance and theater. Utterance, gesture, and the inane parlance of the entertainment industry are the materials through which Hartman explores the losses inherent in the performance of American masculinity in his film/video works. The three works featured in HALFWAY TO VEGAS were shot before, during, and after Hartman's transition from female to male reflecting bewilderment at the debilitating scripts of American masculinity. Infantile and speechless, blathering and sadistic, the characters in Hartman's film/video works seem to be desperately scanning for respite inside the farcical negotiations for power and privilege they set up and fracture.

Artists Jesper Just and Asher Hartman will discuss their respective solo exhibitions, "Jesper Just: Sirens of Chrome" and "Asher Hartman: Halfway to Las Vegas," at UCR Culver Center of the Arts and Sweeney Art Gallery. The Just discussion will be led by the curator for the exhibition, Jennifer Frias, associate curator, Sweeney Art Gallery, and the Hartman discussion will be led by co-curator for the exhibition, Jeff Cain, exhibition designer, ARTSblock. The exhibitions close on Saturday, January 21, 2012.