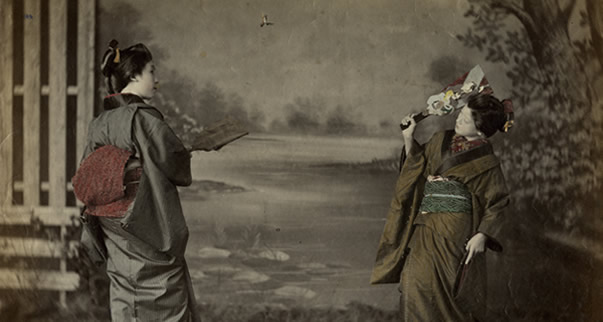 
In announcing the invention of the daguerreotype to the French Academy of Sciences in 1839, Daguerre and his colleague Arago were quick to point out what they perceived as the photograph's main flaw: its lack of color. While scientists and some photographers attempted to find the means to render color through the camera, many studios employed colorists who would hand-paint photographs. Colorists typically blushed subjects' cheeks, jewelry was emphasized or embellished, and adding pigment to the sitters' fine clothing was also not unusual. However, as photography shifted from plates to paper, some colorists became a little more heavy-handed, sometimes almost completely obliterating works with overpainting.

In 1901, as the first potentially viable color photographic processes were being unveiled, George Bernard Shaw proclaimed, "As to the painters and their fanciers, I snort in defiance at them; their days of daubs are over." The processes that Shaw lauded were complicated and therefore more costly, so that commercially hand-colored photographs remained relatively common and popular. Although color photography found its way to the mainstream by the mid-twentieth century, artists continued to paint on photographs, but their intention in doing so was different. Rather than attempting to represent the scene in living color, as photographic colorists previously had, photographers like Gail Skoff now sought to amplify or alter reality through color. Others, including Holly Roberts, use painting to obscure and alter the photograph completely. These contemporary painted works push the boundaries of artistic media and are a far cry from the subtle tinting of early photography, a medium that Baudelaire once called the refuge of failed or lazy painters.