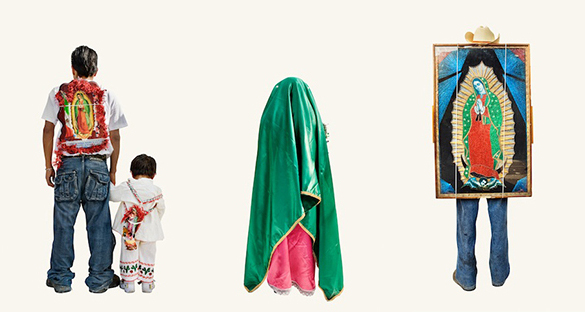 
The California Museum of Photography at UCR ARTSblock presents Alinka Echeverría: Faith and Vision, the artist’s first solo museum presentation in the United States. Echeverría’s work, which equally engages the histories of fine art and documentary photography, investigates the relationship between seeing and believing.

The exhibition features an immersive installation of Echeverría’s celebrated series “The Road to Tepeyac” (2010), as well as work from the artist’s new project “Deep Blindness” (2014). Additionally a new iteration of the 2012 project “Small Miracles” (2014) will be temporarily installed on the Culver Screens, located on the façade of the Barbara and Art Culver Center of the Arts at UCR ARTSblock.

The exhibition will be accompanied by an academic conference organized by Jennifer Scheper Hughes, Associate Professor of History at UCR, and Jennifer R. Nájera, Associate Professor of Ethnic Studies at UCR. The conference, “Objects of  Devotion/ Objetos de devoción," will be hosted at the Culver Center for the Arts, part of UCR ARTSblock, on December 12 and 13, 2014. The film Walking the Camino: Six Ways to Santiago will screened on December 12 and 13 at the Culver Screening Room.