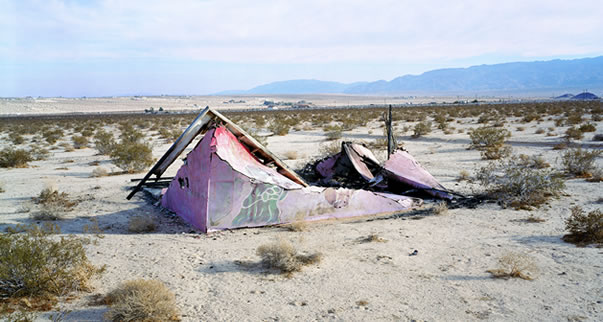 
The influence of the Seismic Shift in landscape photography during the 1970s that the exhibition on the first and second floors reveals has continued into the present. Aftershocks will up-date the historical record by looking at the work of six photographers: three who are in Seismic Shift - Joe Deal, Laurie Brown and John Divola - and three whose work has emerged since the 1980s - Mark Ruwedel, Michael Light and Brad Moore.

In the late Joe Deal's last project, West and West, as in Ruwedel's series on long-abandoned rail lines, Divola?s on isolated houses, and Light's aerial photography, the desolateness inherent in the western landscape itself is acknowledged. Brown's color panoramas of a bankrupt, deserted luxury development on an artificial lake now drying up in the Nevada desert is perhaps closest to her roots in the 1970s, whereas Moore's parodies of the New Topographical photography is, in its way, the most radical departure, one proving yet again that what begins in art as tragedy ends up as comedy.